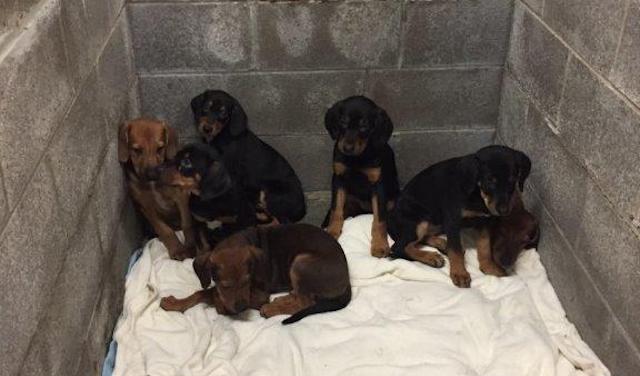 The Humane Society of Ontario County reports that on November 29th around 2:30 p.m., the Canandaigua Police Department and Canandaigua Code Enforcement Officers, responded to the Lakeside Village Apartments — along with the Human Society — where a vacate order had been issued to the tenants.

That warning had been issued earlier in the day; and was not obeyed, according to deputies.

Upon arrival, the apartment was found to be unsanitary, with feces and urine that created a pungent ammonia smell that filled the apartment.

In addition, fleas, gnats, and garbage were found throughout the apartment. At the time, Howard T. Gilbert, 26, of 275 Jefferson Avenue, in Canandaigua reported to have three dogs living in the apartment.

Upon further investigation, a total of 12 dogs — five adults, and seven three-month-old puppies — were found inside the apartment.

Both He, and Breanna N. Gilbert, 21, of Canandaigua were charged with misdemeanor animal cruelty. Mr. Gilbert was transported to the Ontario County Jail, and Mrs. Gilbert was issued an appearance ticket for Canandaigua City Court.

The dogs were seized by the Ontario County Humane Society after being examined by an area vet and are being cared for at the Humane Society sanctioned facility.