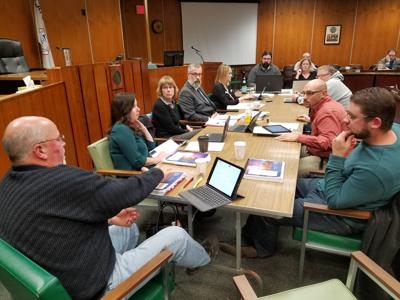 A Cayuga County Legislature committee Tuesday passed a preliminary budget for 2019, reducing the total tax levy by approximately $200,000 from the tentative budget proposed by the county administrator.

The Ways and Means committee voted in favor of a budget with a property tax increase of 2.4 percent over the 2018 budget with a total tax levy of approximately $40.75 million, down from a 2.9-percent increase and a $40.95 million total first proposed by County Administrator J. Justin Woods and Budget Director Lynn Marinelli.

The preliminary budget approved by the committee also reduced the use of the fund balance to $806,975, down from $945,536 in the tentative budget.

Several legislators on and off the committee argued in favor of further reduction down to a 2-percent increase.

Legislator Andrew Dennison, R-Ira, referred to a report from the CGR consultant’s group that the county’s population would likely fall to 66,000 by 2040, saying ever-increasing taxes were a primary motivator for residents leaving the county and the state.

“I just look at this and say ‘this is why CGR says we’re going to drop,'” Dennison said.