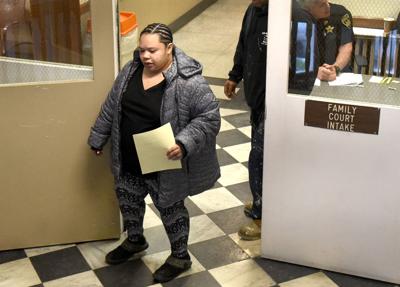 A North Syracuse woman who killed two people and injured three others in a car crash last year was sentenced to five years of probation in Cayuga County Court Tuesday morning.

In June 2017, Kadesha Dunham, 25, attempted to pass a concrete truck on Franklin Street Road in Sennett. On Dunham’s third attempt to pass the truck — in a no passing zone on a blind hill — she smashed head-on into an east bound pickup truck. The pickup truck’s driver, William Curtis, of Skaneateles, attempted to avoid the collision but could not.

Dunham’s front seat passenger, Terrel Jackson, 29, of Syracuse, was pronounced dead at the scene. Dunham and 2-year-old back-seat passenger Iy’Leiah Noreault were flown by helicopter to University Hospital in Syracuse. The day after the accident, state police announced Noreault died, and Dunham was in critical condition.

In July, Dunham pleaded guilty to two counts of criminally negligent homicide, class E felonies, and three counts of third-degree assault with criminal negligence, class A misdemeanors. The felonies carry a maximum sentence of up to four years in prison.