Skaneateles gets revenge on Cazenovia behind Hackler’s 4 TDs

Earlier this week, in preparation for Saturday’s rematch against Cazenovia, Skaneateles coach Joe Sindoni sat his team down in the film room. Instead of showing them highlights of this current iteration of Cazenovia, he rewound the clock to 2016, replaying the 51-0 Cazenovia win over Skaneateles in the first round of sectionals. 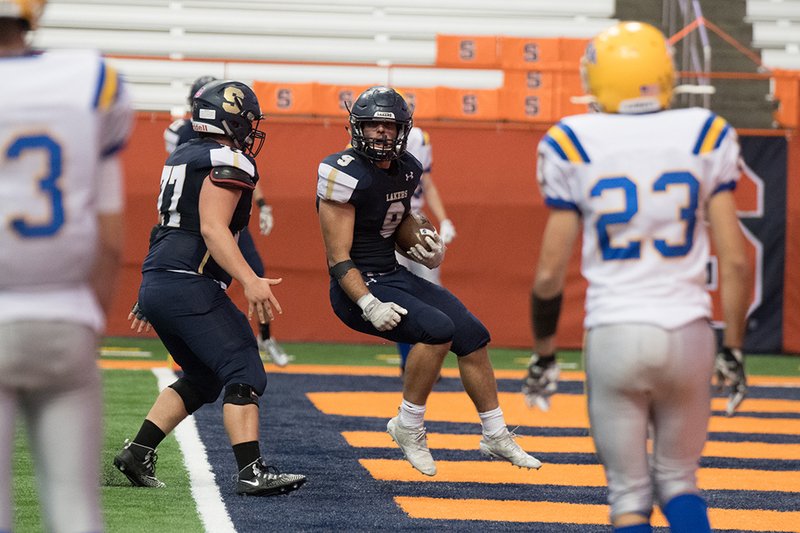 “This group was formed by a very bad loss to Cazenovia two years ago,” Sindoni said. “They were freshman and sophomores and they played Caz, who won the sectionals that year, and they really put it on us. I said to the kids ‘That’s who you want to be. Here’s what you have to do to get there.’”

On Saturday afternoon in the Carrier Dome, Skaneateles (10-0) enacted revenge against Cazenovia (8-2) in the Section III Class B championship, winning 41-10.

Skaneateles defeats Cazenovia 41-10 in the Section III, Class B championship Saturday at the Carrier Dome in Syracuse. (Kevin Rivoli, The Citizen) Story and photos https://t.co/VT7njzJ8jq pic.twitter.com/2bOAbzO9SN

Final, @SkanLakers beats @CazenoviaLakers 41-10. So it's the showdown – Skaneateles against Chenango Forks, 1 vs. 2 in the state, next Saturday at 3 p.m. in Class B regional final at C-NS's Bragman Stadium