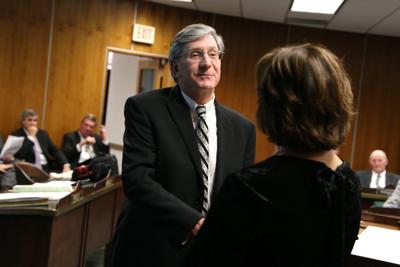 Longtime Cayuga County Attorney Fred Westphal resigned suddenly Tuesday, ending an approximately 30-year career with the county, but officials are not discussing any reasons behind the resignation.

According to a letter of resignation submitted Tuesday to the Legislature Chair Patrick Mahunik, D-Auburn, Westphal met Monday with the Chair and Legislator Ryan Foley, D-Auburn, who chairs the Government Operations Committee, to offer his resignation, which the full Legislature accepted.

“Effective immediately, I resign. It has been a pleasure serving the County Legislature,” the letter reads.

Multiple officials contacted by The Citizen Tuesday, including several legislators and the county administrator, either did not return a request for comment or declined to comment on any reasons behind the move, citing personnel matters confidentiality.

No mention had been made of a pending resignation by Westphal in any non-executive session portions of Legislature committee meetings in recent months.

Palermo previously served as a legislator from November 2004 to January 2011, when he was hired as a lawyer with the county attorney’s office. Palermo resigned from that position in 2012, but was later rehired in the office’s social services division in 2016, according to county Civil Service Commission Administrator Mike Russell.