DeVito came in for Eric Dungey late in the fourth quarter, with hope seemingly all but gone for the Orange, and hit Nykeim Johnson on a 42-yard pass to tie the game at 27 with 1:39 to play. The game went into overtime, and DeVito hit Jamal Custis from 25-yards out to give Syracuse the lead. The Tar Heels answered with a quick score of their own to send the game to a second overtime. 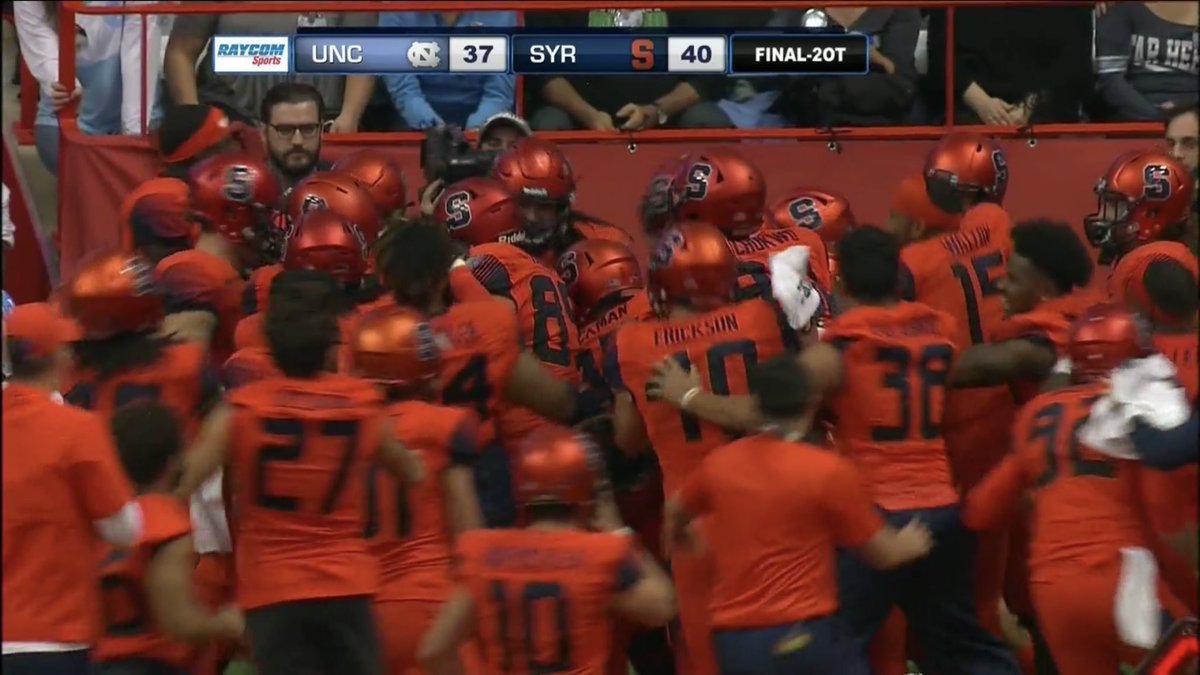 After the Syracuse defense held UNC to a 49-yard field goal in the second overtime, DeVito hit Ravian Pierce from four yards out for the game winner. Read More

What happens after a big win? A trip to Varsity to FLIP THE BANNER!!!! pic.twitter.com/xKGT8to8zZ

Touchdown, Syracuse. The Orange win on a touchdown pass from DeVito to Pierce in double overtime. pic.twitter.com/msqFZOPrad

Talk about happy fans! Syracuse football wins in double OT over UNC?? We’ll hear from alumni in town for homecoming coming up at six @CNYcentral pic.twitter.com/XwJos2CTQn

With two consecutive road games and the bye week behind them, the Orange (4-2, 1-2 ACC) return to the Carrier Dome for the first time since Sept. 22 to play host to Atlantic Coast Conference Coastal Division foe North Carolina (1-4, 1-2 ACC) during Orange Central/Homecoming Weekend. Kickoff is set for 12:20 p.m. and the game will be televised by Raycom Sports.

“Homecoming this week,” head coach Dino Babers said to open his weekly press conference inside the Iocolano-Petty Football Complex Monday. “How cool is that? We get an opportunity to have all the alumni come back and it’s going to be exciting.”

It’s a much-anticipated return to the Dome for the Orange, as well, after dropping back-to-back games at Clemson and Pittsburgh prior to the hiatus. Syracuse led both games heading into the fourth quarter, but wasn’t able to close out either contest. Clemson scored the winning touchdown with less than a minute to go and the Pitt game was decided in overtime. Read More

Back from the bye.
Back in our house.

These three earned the opportunity to be the captains for our homecoming game in the Dome!