Home » News » Courts » CAN YOU HEAR ME NOW? Neighbor of Seneca Meadows wants to jump-start stalled lawsuit on 2025 landfill closure

CAN YOU HEAR ME NOW? Neighbor of Seneca Meadows wants to jump-start stalled lawsuit on 2025 landfill closure

A frustrated neighbor of the Seneca Meadows Inc. landfill has asked a judge for permission to intervene in a long-delayed civil case challenging a local law that requires the state’s largest trash dump to close by 2025.

Dixie D. Lemmon argues that attorneys representing Seneca Meadows, the plaintiffs in the case, and attorneys for the Town of Seneca Falls and its board, the defendants, have been stalling in court for nearly a year as the landfill attempts to negotiate a more favorable long-term arrangement.

“I am concerned … that the Town of Seneca Falls will not aggressively defend this lawsuit and Local Law 3, and (it) will capitulate to Seneca Meadows in one way or another,” Lemmon wrote in an affidavit filed Sept. 12.

The reasons she cited include the town’s economic dependence on “host community” payments from the landfill.

Saying she endures “the incessant odor of landfill gas and decomposing garbage,” Lemmon supports the law and expresses confidence it could withstand any legal challenge.

The landfill is seeking to annul the law through a lawsuit filed last November in Seneca County Supreme Court.

But plaintiffs have never followed up their original complaint with a customary “memorandum of law,” and — in an even more irregular omission — attorneys for the town have never filed a response in defense of the law.

Meanwhile, at the request of attorneys for both sides, Judge Daniel Doyle had granted four two-month postponements of hearings, setting up this week’s scheduled hearing on Oct. 3. Earlier today, Doyle pushed that hearing back to Oct. 30.

At that hearing in four weeks, Landfill attorneys from the Nixon Peabody firm are expected to seek further delays — for many additional months.

In response to the motion to intervene filed by Lemmon and Concerned Citizens of Seneca County, Scott M. Turner urged Judge Doyle, in a Sept. 27 letter, to rule first on Lemmon’s bid to intervene. If and when that petition is granted, Turner requests an additional four months for further pleadings, while awkwardly acknowledging “the court’s need to avoid cases stagnating on its docket.”

Douglas H. Zamelis of Cooperstown wrote Doyle in a Sept. 28 letter: “If intervenors’ motion is heard in late October, the court might not issue a decision until December, which would push the (next hearing date) to at least April of 2019.”

— Does “host agreement” cash — $3.2 million in 2017 — adequately compensate the community for the odor, dust and truck traffic from the landfill?

— If it does not, when and how should the landfill be required to close?

Those hot issues dominated local election campaigns last Fall. The November 2017 elections were effectively a referendum on Local Law 3 (LL3), which had been enacted in December 2016 and upheld by court order last September.

After two pro-LL3 candidates were elected, the five-member board had three supporters of the law and two opponents — Town Supervisor Greg Lazzaro and Deputy Supervisor Lou Ferrara Jr.

Lazzaro and Ferrara have been staunchly in favor of negotiating an alternative to the December 2025 final closing date required by LL3 — and perhaps even rewriting the 2007 host agreement.

In a recent TV interview, both board members said they favor negotiation over litigation. Ferrara warned that Seneca Meadows might withhold its host agreement payments if it were forced to litigate actively.

David Lee Foster, the town’s in-house attorney, and Hou have acquiesced to Lazzaro and Ferrara’s pro-negotiation strategy by declining to prepare any defense to the landfill’s suit.

They have taken that stance with little or no discussion with the three board members who support prompt resolution of the landfill’s lawsuit and enforcement of LL3.

For example, Douglas Avery, a pro-LL3 board member elected in November, said in a recent interview that he and the full board had never authorized negotiations with the landfill.

WaterFront obtained printed copies of various documents in the case from the clerk of Seneca County Supreme Court. (The request was made in response to an online docket report of the case, which included an unspecified filing that was made on Sept. 12. That turned out to be Zamelis’ motion to intervene on behalf of Lemmon and Concerned Citizens of Seneca County).

In his motion, Zamelis claims the town has strong defenses against both the central charges in the lawsuit.

Allegations of procedural violations are “time-barred by the applicable four-month statute of limitations, which expired months prior to the commencement of this matter in November 2017,” he argued.

Allegations that the law itself is invalid would have to overcome “the very strong presumption of constitutionality LL3 enjoys,” he added.

Zamelis, reached by telephone, declined to comment. At a town board Sept. 4, he had urged board members to keep LL3 in place “until and if a court says it should be rescinded. 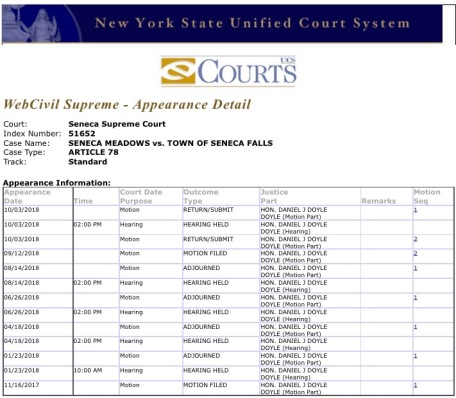 “I am confident no court will do that,” he told the board.

Hou declined to comment in person at the Seneca County courthouse Sept. 28. Foster did not return a phone call or respond to emailed questions.

In a lawsuit, she had sought to void a zoning permit issued by Waterloo Code Enforcement Officer James Cleere.  After a judge in Seneca County Supreme Court dismissed the case, she appealed.

The Fourth Department Appellate Division Court in Rochester ruled 5-0 in her favor in February. In April, it rejected Seneca Meadow’s bid to reargue the case and denied the landfill’s bid to appeal to the state’s highest court.

Peter Mantius is the founder of the Water Front, an all-digital publication dedicated to providing news and coverage of important environmental news in the Finger Lakes. His brings decades of reporting and editorial experience to his work, which includes frequent deep-dives into local, and regional issues. Contact him by clicking here or dropping him a line at [email protected]