The Doubledays were forced into extra innings for the second time in as many days Tuesday night against the ValleyCats. And just like a case of deja vu, Auburn walked the bases loaded in the bottom of the 10th to open up the possibility of a double play.

But while a hit-by-pitch drove in the winning run for the Spikes on Sunday, a bases loaded base hit gave Tri-City (21-15) their extra-inning, 5-4 walk-off victory off of Auburn (18-17).

🦏 went ↖️🌮 for his first pro 💣 (in front of his family)
🐷 #ShaddyLight cracked open his first career dinger
🐦 Tap shut ‘em down againhttps://t.co/nC6llsNiDs

After retiring the Doubledays in order to start off the game, ValleyCats starter Shawn Dubin hit a speed bump to open the second inning after allowing a leadoff home run to Jacob Rhinesmith. It was Rhinesmith’s first professional home run after tearing through his opponents to start the season with a .333 batting average entering Tuesday’s contest, which ranked sixth in the New York-Penn League.

Despite giving up the solo long ball to Rhinesmith, Dubin was perfect otherwise. The homer was the only hit he allowed over three innings, and his five strikeouts on the evening became a new career high.

His opposition, Doubledays starter Francys Peguero, also ended the night with similar results despite showing slightly less control. El Pegui gave up five hits in 4.2 innings of work while striking out two, with his lone run allowed coming in the third inning when a sacrifice fly scored the runner from third.

He was pulled with two outs in the fifth inning in favor of Nector Ramirez, who promptly recorded the last out of the inning.

Nationals top prospect Victor Robles – whose bat had mostly been silent since rejoining the Doubledays for the first time since 2015 on a rehab outing – got the offense kicking once again in the fifth inning. Flashing every bit of his 70-grade speed, Robles legged out an infield single to knock in Jose Sanchez from third base to give the Doubledays back the lead. Auburn added onto that lead when Carson Shaddy ripped a two-run shot over the left field wall in the sixth inning.

But with a 4-1 lead, Ramirez was unable to provide the Doubledays with the shutdown inning they needed. With one monster swing of the bat, Carlos Machado – on a ball that appeared to be tailing foul- launched a homerun to knot up the game at 4-4 for the next three innings.

The Doubledays quickly took their complimentary runner at second base to start the 10th inning and turned it into a bases loaded situation with no outs. A strikeout and a double play, however, left them loaded.

A bunt single in the bottom of the inning quickly gave Tri-City runners at the corners, and a walk juiced the bases. While Tanner Driskill was able to strikeout the next batter, a single to right field secured the win for the ValleyCats and handed the Doubledays yet another disappointing, late-inning loss.

The Doubledays will be back in action Wednesday at 7PM for Game 2 against the ValleyCats. Listen LIVE on FL1 Radio. 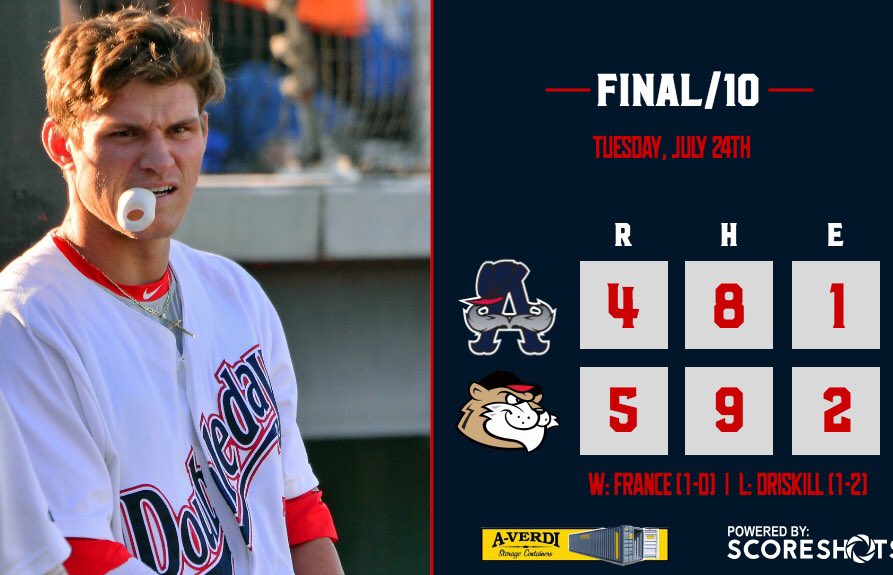