The Cayuga Community College men’s soccer team was recently named the 2017-2018 National Academic Team of the Year by the National Junior College Athletic Association (NJCAA), honoring the team for its success in the classroom.

The national recognition is awarded annually to 14 men’s and 13 women’s college programs who have the top GPA in their sport and a minimum cumulative GPA of 3.0. The Cayuga men’s soccer team finished the season with a cumulative GPA of 3.38, edging the Northwest Kansas Technical College’s 3.37 GPA. 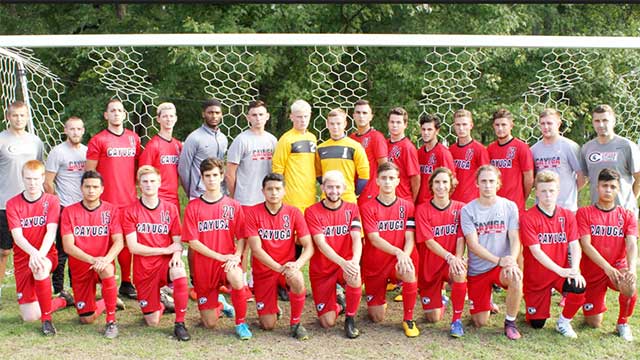 Two other Cayuga athletic teams were also nominated for the prestigious NJCAA award. The women’s cross country team finished eighth nationally with a 3.36 cumulative GPA, and the women’s soccer team finished 57th with a 3.05 GPA.

“We are very proud of the men’s soccer team for receiving the NJCAA’s top academic award and of our women’s soccer and cross country teams for their strong academic performances,” said Cayuga Community College President Brian Durant. “We know our student-athletes dedicate themselves to succeeding in the classroom and on the field, and it’s exciting for them to earn this impressive honor from the NJCAA.”

The men’s soccer team was also impressive on the field. The team finished with a 13-4 record, and in the final month of the season received votes for the national rankings. The team advanced to the regional championship game, where they fell to eventual national champion Genesee Community College.

“This is a tremendous honor for our men’s soccer team to receive this award from the NJCAA. Our student-athletes commit themselves to working hard in the classroom, and it paid off with this recognition of their academic achievement,” said Cayuga Athletic Director Pete Liddell. “Cayuga has a proud history of our student-athletes dedicating themselves to succeeding academically. Congratulations to the men’s soccer team and the women’s cross country and soccer teams for continuing that tradition.”