Seneca County Sheriff Tim Luce provided an update on the explosion and fire reported in Waterloo earlier this week – noting that the investigation remains active.

Deputies responded to 31 Moore Street in the Town of Waterloo for the reported structure fire. When patrol arrived it was reported that the fire was due to an explosion created when work was being done at the home.

The worker, Raymond T. Wiggins, 52, of Geneva was working on water lines at the residence with a torch causing a small explosion and then the fire. Wiggins was treated at the scene by North Seneca Ambulance and transported to Strong Memorial Hospital in Rochester for a burned hand and a laceration.

The home was also occupied by two teenage residents who were not injured.

During suppression efforts a member of the Geneva Fire Department was injured as previously reported, according to Luce.

Assisting at the scene was the Ontario Co. Sheriff’s Office, Geneca PD, NYSEG as well as Fingerlakes Ambulance.

The investigation is continuing at this time.

Officials say the fire that destroyed a Waterloo home was ‘accidental’, and triggered by someone doing work at the house.

Border City Fire Chief John Morabito Sr. said a plumber, who thought he smelled gas — triggered the explosion when he went to sober something.

There were several people inside the home at the time, but no one was seriously hurt. The plumber suffered a minor injury and was sent to Geneva General Hospital for treatment.

An unidentified Geneva firefighter collapsed at the scene, and was transported via Mercy Flight to Strong Memorial Hospital.

The Moore Street house was destroyed, and was already being torn down late-Monday evening. The Red Cross is assisting the family at this time. 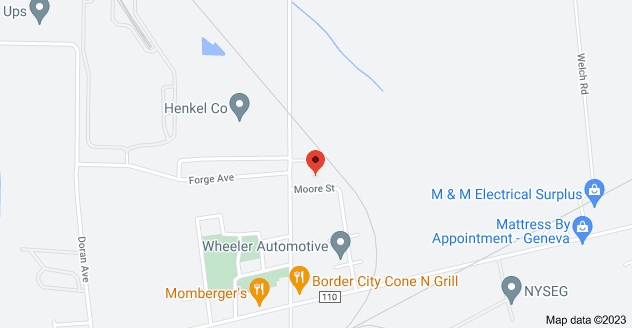