A pair of 16-year-olds were arrested and charged in connection with a major fire that was reported Saturday morning.

The vacant building, which those in the area say had been empty for nearly two decades — was located on Perrine Street.

The two teens, who were seen leaving the building shortly before the fire was reported — were located on Clark Street Road near an office for New York State Police.

They were interviewed and charged, according to law enforcement.

The names of the individuals, as well as their photos will not be released due to age.

One of the 16-year-olds was charged with fourth-degree arson and trespass. He was being held pending arraignment. The other teen was charged with trespassing. He was issued an appearance ticket.

The building was previously known as Auburn Container.

No one was injured due to the fire.

The Auburn Fire Department was called to the scene of a building fire on Perrine Street in the city on Saturday.

It’s unclear what the structure was on Perrine Street that caught fire, but heavy smoke could be seen throughout area neighborhoods.

The Auburn Fire Department referred to the structure as a warehouse, and crews were seen battling the fire from the outside. It is not believed that anyone was inside the structure at the time of the fire. First responders say that while fighting the fire – part of the structure had collapsed. 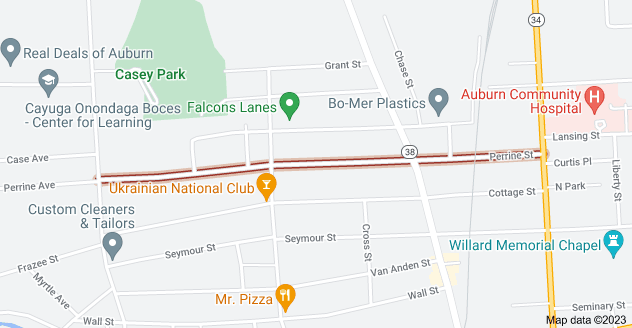