The damaging winds have passed, but winter has returned to the Finger Lakes.

Take a look below at the sights and sounds of Wednesday’s damaging wind event.

Several large trucks were reported as overturned on major interstates around Rochester; and a tree was reported down on State Route 96 in Ontario County, as well.

In Canandaigua crews responded to the report of a mobile home coming apart due to the high winds; and in Webster a home was heavily damaged after a large tree was uprooted and crashed through the roof.

The occupants were not seriously hurt, but firefighters had to crawl through debris to get the 75-year-old out.

The Wayne County Emergency Management Office had opened warming facilities for those without power, but announced that they would be closing as of 3 p.m.

The tree, about two feet in diameter, was unstable- making the rescue that much more difficult pic.twitter.com/yr8ECNyJex

Firefighters had to crawl through the debris in order to rescue the man, eventually being able to get him out of the destroyed home where he was trapped for nearly 30 mins pic.twitter.com/MexHBZmFGh

Emergency responders were able to rescue a man trapped inside his West Webster home. He's in his 70s, his wife heard the crash and thought the worst. He has minor injuries and was brought to the hospital once they were able to get him out pic.twitter.com/t2JU0nEQ9c

Current gust at the #ROC airport at 64 mph. I expect this for another hour or two before slowly winding down. @News_8 pic.twitter.com/BOgfrR1wgS

On my way to the Lake…but first I had to navigate around this…just as I emerged from my culdesac, no less. #ROCWx #Rochester #GalesOfApril pic.twitter.com/JlpLdM4KvU

Brave guys up on the roof ventilating for the second alarm fire on brace Road in Victor pic.twitter.com/wz7UKoqywj

Under control. No state police at the scene had a fall tree across the road right by one of their patrol cars

Im here at Frontier Field where a large tent has blown over from the strong winds and has crashed into the fence. Crews are out here trying to take apart the tent now. Winds are still whipping; adding to the problem @News_8 #ROC #windy pic.twitter.com/Gxaoh9wlEj

50 to 60 foot tree blown over by strong winds here in Brighton at the intersection of Southwood Lane and Edgewood Avenue. RG&E has turned off power. Fire Cheif believes power should be restored within the hour @News_8 #ROC pic.twitter.com/U7tKrkcwO7

Peak gust at the airport so far is 62 mph. Observation from 10:13 AM. The wind will stay in a range that can cause damage to trees and power infrastructure through 6 PM this evening. #ROC pic.twitter.com/K4j2hPD6mG

Here's what you should know to stay safe: pic.twitter.com/C4Jqm6dbJo

Between the rain and the wind, it’s just an absolute mess out here this morning. Use caution on the roads and watch out for down trees and power lines. @News_8 pic.twitter.com/PmvWzhJmWx

Wind damage reports already starting to come in this morning, conditions will continue to deteriorate across the region over the next few hours. https://t.co/7H1LLoS5gC

Here’s an early casualty of today’s high winds in Buffalo. Too bad the steady rain is over. https://t.co/h8CRLd8VlW 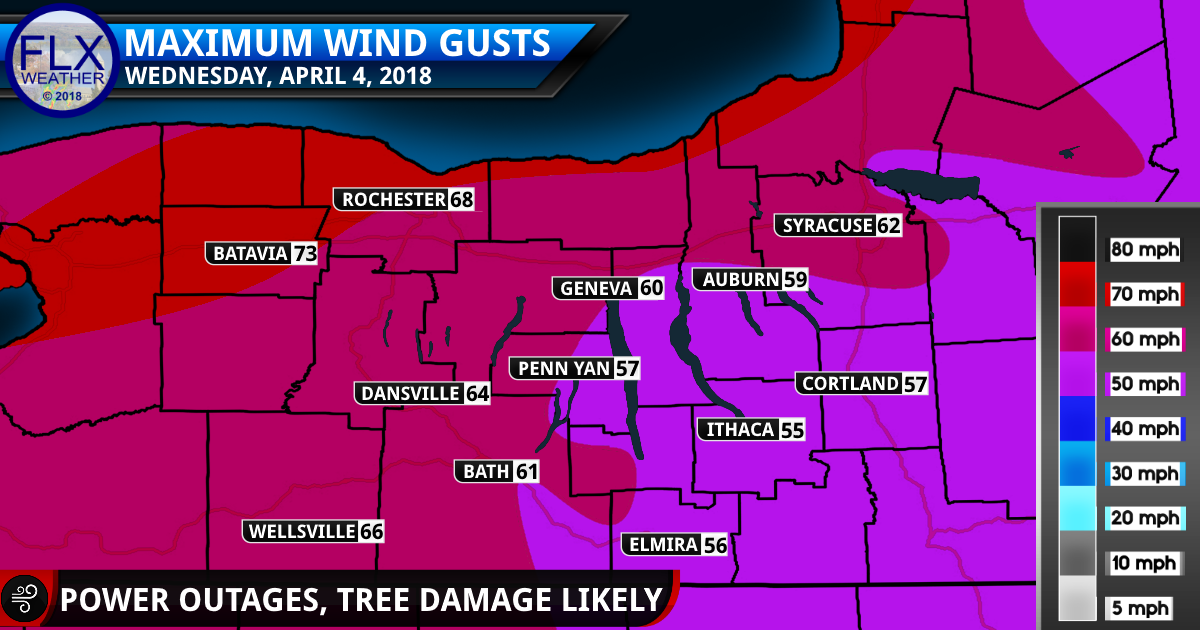