Snow, wind will remain locked in the FLX through day (full coverage)

Wednesday will be a snowy, cold, blustery day making it feel like mid-winter, despite spring being a short time away. Check out the latest forecast information below as winter continues to thrash the Finger Lakes.

– Areas of lake effect snow will continue throughout the day, according to FLX Weather Meteorologist Drew Montreuil. Some squalls, which will dump moderate amounts of snow will be spread throughout the afternoon and evening as well.

– The snow will be heaviest in the Eastern Finger Lakes, over the hills of Cayuga and Owasco lakes. While the rest of the region should see anywhere from 2 to 5 inches of snow, these areas will likely end up with more than a foot of fresh snow.

– Strong winds will develop during the afternoon hours, which will bring blowing and drifting snow into the equation. Gusts could be in the 30 to 40 mph range, with higher gusts possible in those ‘higher’ terrains and hilltops.

– By evening, the snow will begin pulling out of the region, as the system responsible for creating the lake effect snow gets pushed away. By midnight it should be completely over for most of the Finger Lakes.

– Thursday will remain windy, and cold despite some sun popping out, according to Montreuil, who says that the cool, breezy pattern will continue. By the weekend, the weather should improve to a point where temperatures will moderate.

Check the below resources for the latest on the winter weather. 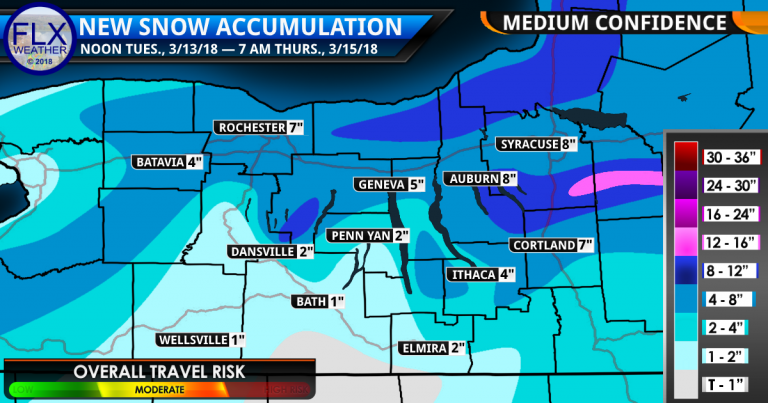 It’s a Beautiful Day plays on the radio but the roads not looking so beautiful on 104 E. Conditions got worse after we crossed the Bay Bridge. @13WHAM @989TheBuzz pic.twitter.com/LknIxGQGRr

Oh come on! Clear off your back window. pic.twitter.com/hRhuqdvuCa

The car that slid off the road on 104 Eastbound is just now getting some help, about an hour and a half later. Crews are busy with other accidents and delayed by road conditions @13WHAM pic.twitter.com/zYQiFA3EEq

@NWSBUFFALO 3.5” of snow overnight in northern a Town of Phelps, Ontario County. Slushy on the bottom. Not much wind yet.

If the same HRRR model proves true, we'll be dealing with squalls through the afternoon until just before sunset with the steadiest snow south and east of #ROC. Expect winter driving conditions into tonight. pic.twitter.com/XtJgbQAicR

8:25 am radar update: Band of heavy snow extends from southern Monroe Co. Cuts through the Finger Lakes. Snowfall rates 1"+/hr. Boost from both Lake Ontario and the Finger Lakes. Our Syracuse based radar shows it nicely! pic.twitter.com/TKexzZe4LS

#GOES16 water vapor imagery shows the exiting #noreaster throwing a slug of moisture back across the eastern #GreatLakes…one of the main reasons for all the #snow in #cny today. pic.twitter.com/RHim1HuZJf

At 8 a.m. moderate snow is falling in Rochester with the visibility down to half a mile. Main roads are doing better, but side roads are still snow covered in many spots, so allow extra time this morning! #ROC pic.twitter.com/ikVpBUlGbk

A close up look at that crash. One car involved. The roads are still slippery. Lane merges to one lane in this area. Minor delays. Driver of the car appears to be ok. @13WHAM pic.twitter.com/qLnzED63BF

A crash on the inner loop in the westbound lanes. Causing some delays. @13WHAM pic.twitter.com/3dBCYm4tSr

Every 90 degree turn you will slide and the same with any stop and start pic.twitter.com/oGdrkuOpYA