After jumping out to a 10-point lead in the first quarter, Notre Dame-Batavia was able to pull back to as close as 1 point in the second period before South Seneca senior Skylar Shaulis hit a pair of three pointers while her sister, freshman Logan Shaulis, buried another from long range to put the Lady Falcons ahead to stay.

Junior Jenna McDonald led South Seneca in scoring with 17 points while dishing out 7 assists. She left the game late in the fourth quarter after tweaking her ankle and watched the final 2 minutes from the bench with her lower leg wrapped in ice.

Skylar Shaulis scored 14 points and pulled down 10 rebounds while Jade Parson was held to 7 points while grabbing 10 rebounds and blocking 3 shots. Logan Shaulis scored 7 points to go with 7 rebounds and 3 assists and Emma Fletcher scored 7 points. Alissa Fletcher added 4 points and Avrielle Fletcher, in her first action of the season after recovering from a knee injury, hit a pair of late free throws for her first points of the season.

Notre Dame-Batavia was led by Margaret Sutherland who scored a game-high 18 points while Callie McCulley added 16 for the Section V Class C1 champs in the loss. 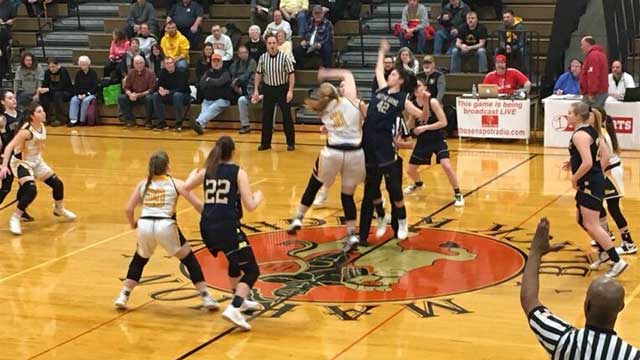 Next up for South Seneca is the Section 6 Class C Champion Allegany-Limestone Gators. The Gators bring a 22-1 record into the Far West Regional Game to be played on Saturday evening at Rush-Henrietta High School. They will have to contend with Gators leading scorer Morgan Davis who averages 18 points and 13 rebounds per game and her teammate Brook Giardini who averages 14 points per game.

FingerLakes1.com will stream Saturday’s Far West Regional games in Class C and Class B on Saturday night on FL1 Radio beginning at 5 pm. The 5 pm game will feature South Seneca vs. Allegany Limestone and the 7 pm game will feature the undefeated Midlakes Screaming Eagles against the winner of the Section 6 Class B State Qualifier between Southwestern and Fredonia which will be played on Wednesday night.

FL1 Sports will also be live on Wednesday night from Rush-Henrietta for the Section V Boys State Qualifiers in Class C (Lyons vs. Northstar Christian at 6:30 pm) and Class A (Wayne vs. Irondequoit at 8:15 pm)