The Newark Pilots picked up their fourth straight win, defeating the Jamestown Jammers 7-3. The win improves the Pilots to 15 and 26, and the loss drops the Jammers to 28-12. Chris Vitale (Erie CC) earned his fourth win of the season, going 5 innings, giving up just 3 hits and 2 runs. Michael Ginther (Canisius) lost his first game, going 4 innings, surrendering 8 hits and 4 runs. Kyle Griffen (Louisiana Tech) picked up his fifth save, getting the final six outs of the ball game.

Jamestown took an early 2-0 lead in the top of the second. After Vitale walked both Skyler Valentine (UTSA) and Alex O’Donnell (Mercyhurst), Connor Rule (Kansas State) drove in Valentine on a ground out for the games first run. After two more walks to John Conti (Canisius) and Christian Deaton (CSU Bakersfield) to load the bases, Vitale gave up an RBI single to Chris Estrada (UTSA). 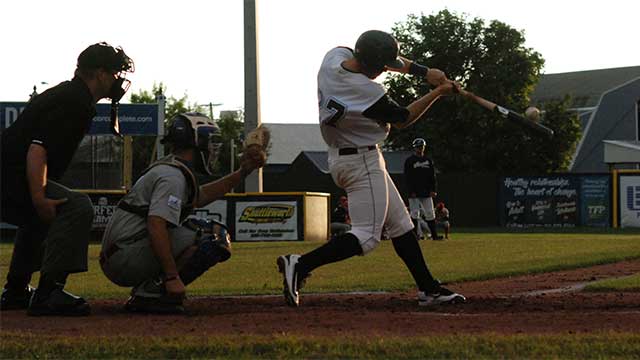 Vitale would settle down, pitching two straight scoreless innings to allow the Pilots bats to arrive. In the bottom of the fourth, the Pilots took the lead. After Ginther retired the first two Pilots, Christian Orr (Saginaw Valley) worked a walk to extend the inning. Mark McKenna (Canisius) hit a single, before Graham Hackbarth (Pearl River CC) hit an RBI double to score Orr. Hunter Wells (Tyler JC) then came up and drove both McKenna and Hackbarth in with a single. After Wells stole second, Will Allocca (Virginia) drove him in with a single to give the Pilots a 4-2 lead.

Newark would add another run in the bottom of the fifth. Colton Carney (Seton Hill) led the inning off with a double against Ryan Boyer (Pitt-Bradford), then came around to score on a wild pitch to put the Pilots up 5-2.

In the top of the seventh, the Jammers cut into the lead when Ben Brookover (UTSA) drove in Deaton with a groundout to cut the lead to 5-3 off of Zach Mann (Saginaw Valley).

In the top of the eighth, Jake Bernardo (Fordham) came out of the pen for the Pilots. He walked the first O’Donnell, then hit Rule, before being pulled for Griffen. Griffen came in and struck out Conti, got Deaton to pop up, and Estrada to ground out to end the threat.

In the bottom half, the Pilots added two insurance runs. First, Wells drove McKenna in with a double, and Allocca drove in Wells with a single to give the Pilots a 7-3 lead.

After Griffen made an error to start the ninth, he retired the next three Jammers hitters in order to preserve the Pilots win.

Newark will play an exhibition game tomorrow at 7:05. Jamestown will host Elmira.