It’s the first big event of the season, and everybody is invited to enjoy the events in Lafayette Park. Although the dog drill team and the war dogs will be eagerly welcomed to the Celebrate Commemorate parade on May 23, Celebrate Commemorate organizers ask that people please do not bring dogs to the park.

“Due to the highly attended and the congested event grounds and for the safety of our four legged friends and the enjoyment of all, no dogs or pets will be allowed on the Lafayette park grounds during the Celebrate commemorate event,” said co-chair Jane Shaffer. Village Deputy Mayor, Celebrate Commemorate co-chair Dave Duprey added, “The no dogs allowed will be strictly enforced by the Village of Waterloo resolution in effect May 23rd & 24th. Dogs are welcome everywhere else in the Village while on a leash.

”There will be plenty to see and do in the park during Celebrate Commemorate, which is alcohol-free. Walt Bennett has organized a full schedule of acts on the stage in Lafayette Park. The Hit Men lead off the entertainment following the parade on Saturday, May 23. A perennial favorite, they are a group of good fellas who come together from all parts of the New York area. They provide a performance that combines both the musical and the theatrical. Their show stopping demeanor means they provide the best entertainment around.Covers Exposed take the stage at 1:40.They are a NEW (in 2014) 9-piece “cover” band in western NY with a rockin’ three-piece horn section! They play the great songs that we all grew up with, from the 50’s though today – authentic horn parts, 3-part vocals, with all the energy and versatility of the best bands in the country!.Donna and the Country Mystics, a local favorite, follow with their real country music, Banned from the Tavern playing all your favorite rock, blues and soul songs from past and present at 4:30 and Rock-It-Science, classic rock and roll with an attitude at 6 pm and Flint Creek closes the show at 7:30 with country music for listening and dance.The action shifts to Oak Island where Rebecca Colleen and the Chore Lads will perform their popular bluegrass music before the fireworks.On Sunday, the harmonies of Seneca Soundwaves open the performances at noon. The tunes continue with Indie rock quartet Molto Bene at 1 pm, Slow Riders country sounds at 2:30 pm. Diana Jacobs Band, formerly Midnite Mood, was nominated for a 2013 Syracuse Area Music Award as best R & B band. They will be the final act at 4:10 pm. 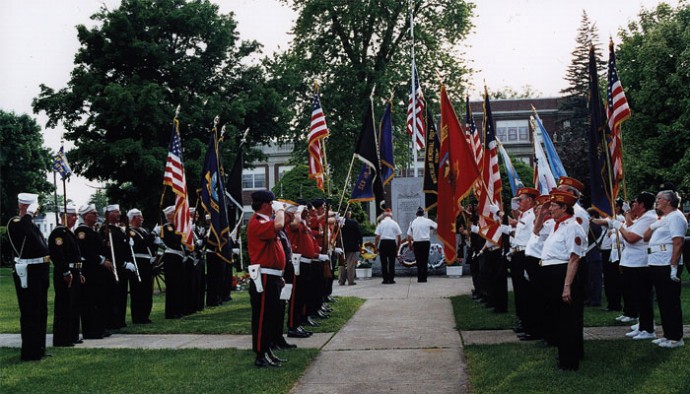 “We have a good mix of old favorite bands and some new ones, r&b and country, vocal and instrumental groups,” Bennett said – “There’s something for everyone.

”The 16th annual Celebrate Commemorate event will be held May 22 through 25 in Waterloo, the Birthplace of Memorial Day. For more information about the events, go to www.waterloony.com. The 149th consecutive commemoration of Memorial Day will be on Friday, May 30. It will include prayer services, and the official Memorial Day parade at 6 pm. #